This is Part I of a two part pdf publication written by Mead Killion, inventor/engineer of the K-Amp integrated circuit chip. Originally published in the American Journal of Audiology, July 1993.

If you are looking for in-depth technical information on the K-Amp hearing aid, this is probably the definitive publication. 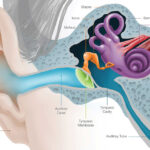 This is Part II of a two part pdf publication written by Mead Killion, inventor/engineer of the K-Amp integrated circuit chip. Originally published in the American Journal of Audiology, July 1993.

Yeah, it’s a lot of reading, but you wanted more information, right?

The frustrating thing is that Mead Killion had it all figured out in 1988 when he came out with his K-AMP. For those of you who remember 1988 (and I guess that if you do remember 1988, then you were not really there… people used to say that of the 1960s, it was a time of great change in the hearing aid industry. For the first time there were multichannel hearing aids; digitally programmable hearing aids were everywhere; the class D output stage (developed for Knowles Electronics by Killion and his engineers that year) was replacing the old style class A amplifiers that distorted with high level inputs; and the K-AMP was introduced. (The ER-15 Musicians Earplug was also introduced in 1988, but that’s a different blog.) I guess that one could say that 1988 was Mead Killion’s Annus Mirabilis.

I still have musician clients who were initially fitted with the K-AMP and are madly trying to find a new hearing aid that sounds half as good as their old one. I did a home visit on an elderly jazz musician last week and as soon as I gave him back his old repaired K-AMP hearing aid, his shoulders dropped from being in a tense position to a relaxed one; he heaved a sigh of relief and a smile crossed his face.

I should point out that for me to get his old K-AMP repaired, I needed to bug a friend of mine who works for a hearing aid manufacturer to look through old dusty boxes of IC chips and other long-retired hearing aid components. He found one K-AMP circuit that he was able to use to get this manís hearing aid working again.

So what did Mead Killion know in 1988 that we seem to have forgotten? Well, the one big issue is that the K-AMP was analog. Before we roll our eyes, itís not necessarily that the hearing aid was analog – we can make many of the modern day hearing aids sound just like the olden days if we desire – but analog hearing aids do not have an analog-to-digital (A/D) converter . It is the A/D converter that is the weak point in modern digital hearing aids.

And, oh yes, there are a couple of other things that Killion did in 1988- the K-AMP was single channel (which treated the lower frequency fundamental energy in substantially the same way as the higher frequency harmonic energy); the compression was WDRC, but had a very mild compression ratio (typically 1.5:1 to †2:1), and the output for loud sounds was uncompressed (linear), which Bill Johnson (a well respected engineer in our field) once said was the true genius of the K-AMP design. Most importantly, it had a “front end” that didn’t distort with the higher levels of music. In fact, the K-AMP could handle inputs of 115 dB SPL, which was (and still is) the maximum level of hearing aid microphones. You could stick your head into a piano and pound the keys and perceive no distortion.

In contrast, modern digital hearing aids have had to play “catch up to 1988”. Technological “tricks” are sometimes used that fool the microphone into being less sensitive for music such that what is applied to the A/D converter is within its operating range. These include actual microphone attenuators, microphone frequency response alterations, analog compressors prior to the A/D converter (with a digital re-establishment of the input after the A/D converter), and even dynamic range shifters that takes a 16 bit, 96 dB dynamic range and shifts it up to 15 dB SPL to 111 dB SPL – a range that is more optimal for music.
I recall having a hearing aid specially built by a manufacturer that had two processing paths – one was their proprietary digital route and, with a flip of a button, the music route went through a K-AMP IC. Both routes used the same microphone and same receiver. It was larger than the client wanted it to be, but the sound quality of the “music route” was outstanding.

If anyone has a secret stash of K-AMP ICs in their back room, please let me know. I am at a point in my career that I will buy them and have a local manufacturer “custom” make a Killion-designed hearing aid for my musicians. Of course, in the United States, there is one manufacturer that still markets the K-AMP (General Hearing – now SoftTouch Labs), but in Canada, Europe, and the rest of the world, we need to settle for second best.

If I sound frustrated, I am, and so are my musician clients. There are some really neat innovations for musicians out there (and many of my musician clients are “almost” successfully wearing them) but sometimes a solution needs to be “low tech” even if the market place frowns on this.